'Farewell' and 'last hurrah' parties at clubs slammed by public 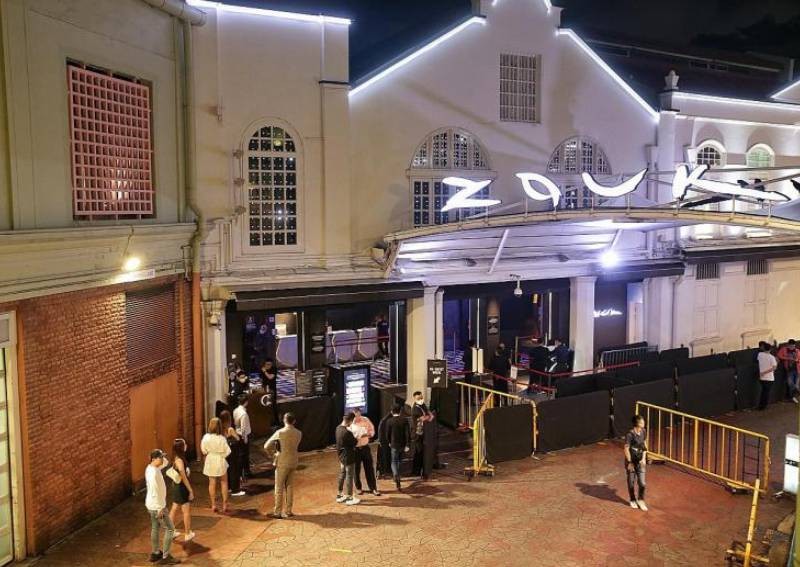 Club-goers did not have to wait long to enter popular nightclubs like Zouk last night. Some other clubs had promotions of 'farewell parties' before the mandatory closures.
The New Paper

Nightclubs hoping to host "last hurrah" and "farewell" parties yesterday were hit by instant public backlash, not to mention stern disapproval from the authorities.

The proposals for such parties come in the wake of Tuesday's announcement that all entertainment venues, including bars, nightclubs and discos, must be closed from 11.59pm tonight to help stem the spread of Covid-19.

Some establishments urged clubbers to come out for "one last bash" before the closures.

Cherry Discotheque at Cecil Street posted details of such a party on social media, with a number to call for "sofa reservations and public backlash".

Others, like Club Lux at Orchard Plaza, decided on a two-day event with special promotions and performances, inviting clubbers to drink with them at "the last supper" before the shutdown.

It did not go down well, with netizens slamming the clubs, calling them irresponsible.

The Singapore Tourism Board, Enterprise Singapore and Singapore Police Force subsequently issued a joint statement yesterday saying it was aware of such parties and urged people to be responsible.

The statement also said officers would be on the ground to monitor the situation.

The New Paper understands the police will be carrying out licensing enforcement at establishments, and those in breach may lose their relevant licences.

Cherry Discotheque has since cancelled its event, saying there was a "lack of foresight".

Last night, the crowds were quite sparse at popular nightclubs like Zouk and areas like Clarke Quay .

Dr Jade Kua, a senior consultant at KK Women's and Children's Hospital, posted a video on Instagram yesterday urging clubbers to be responsible.

"To club operators who are hosting 'last hurrah' parties, and to the people who are going to them, please don't," she said.

"We are in the middle of a pandemic, and it's really bad."

Law and Home Affairs Minister K. Shanmugam told Parliament yesterday that the police would investigate reports of returning residents acting irresponsibly, flouting isolation orders and going to social gatherings and parties. He said offenders will be charged in court.

There are about 50,000 workers in the nightlife industry, and Mr Joseph Ong, the president of the Singapore Nightlife Business Association, told TNP that the multibillion-dollar industry is expected to be badly hit.

He said: "Singapore is not in a full lockdown like other countries, where only essential services are allowed to operate.

"But for some in the nightlife industry, because there is no way they can operate with the new measures, it is essentially the same thing."

Mr Ong, who is also the boss of 1-Group, which operates clubs such as Altimate and Yang, said the staff will have to be put on leave and that the rental costs were going to be a problem for many.

"I can only hope for some measures from the Government that will help us see some kind of light at the end of this tunnel."

This article was first published in The New Paper. Permission required for reproduction.