According to researchers from the University of Southern Mississippi, men with “dad bods” are perceived by women to be better parent material.

Mums, perhaps you’ve noticed that your hubby has gained some extra weight since getting married and becoming a parent. But before you shake your head at the realisation, here’s some good news.

According to researchers from the University of Southern Mississippi, men with “dad bods” are perceived by women to be better parent material.

The term “dad bod” is a body shape referring to men, especially fathers who are relatively slim but not lean or toned. They could appear to have noticeable body fat, particularly around their bellies.

More than 800 women participants were shown photographs of men’s bodies in the new study, ranging from lean to slightly overweight.

They also had to rank the men in the pictures on how they would fare in 36 different positive and negative parenting behaviours.

Results showed that men with the typical “dad bod” topped the list when it comes to staying committed in the relationship and their perceived ability to bring up children.

Men with toned and muscular physiques (low body fat and high muscle mass) on the other hand suggest higher levels of dominance and scored the lowest with women, despite them being seen as generally more attractive.

Negative traits assigned to these chiselled men include:

According to researchers from the University of Southern Mississippi, fathers who carry a little more weight are perceived as less ‘dominant’, thus making them seem warmer and more committed.

“High fat and small muscles were perceived as more indicative of positive parenting abilities,” wrote researchers in the journal of Evolutionary Psychological Science.

While it is in fathers’ favour to have a “dad bod” as compared to their muscly counterparts, women actually mean dads in the likes of Matt Damon, Leonardo DiCaprio and Jack Black.

Interestingly, research also reveals that men and women physiologically change following the deepening in their commitment to romantic and family relationships.

Read Also
Die, dad bod: This young father had the guts to lose that gut 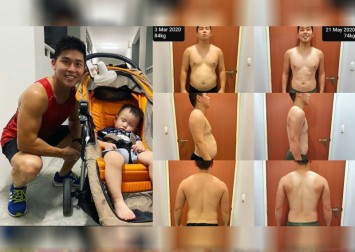 Men with higher testosterone are generally said to have less body fat. However when they become committed partners and parents, their testosterone typically declines.

The study, however, did not include very unfit or overweight men who may also be judged negatively. In essence, the “dad bod” is about being fit enough but not to the extent of being self-obsessively fit.

“It is often the case that people are motivated to be fit to attract mates, so heavier men and women may be communicating less concern with personal attractiveness and attracting new mates, and greater interest in parental investment with a current partner,” said Donald Sacco, lead author of the study.

This article was first published in theAsianparent.