A few days after President Joko “Jokowi” Widodo issued the order to stay, work and study at home in mid-March to curb the spread of Covid-19, residents of a low-cost apartment complex in Klender, East Jakarta, were busy racking their brains for a way to keep their homes virus-free.

At the time, some of the residents of the rusun were already well-aware of the highly infectious disease, thanks in no small part to the unceasing news coverage on the topic.

The banners urged all tenants to obey the government’s call to stay at home, wear masks at all times when outdoors and maintain safe distance from one another, although the latter suggestion elicited more than a few raised eyebrows and shrugs.

More than 1,000 families occupy the densely populated 76 blocks of the complex, each containing a four-story apartment building.

Parat said that the complex’s senior residents held regular meetings to discuss any latest developments that concerned the rusun. Rumor had it that the complex would be demolished and replaced with newer buildings, but the outbreak had put a damper on the plans.

When the circumstances related to the Covid-19 outbreak became increasingly dire, gatherings were banned at the complex, the multipurpose hall was closed indefinitely and the tenants started communicating mainly via WhatsApp chat groups. 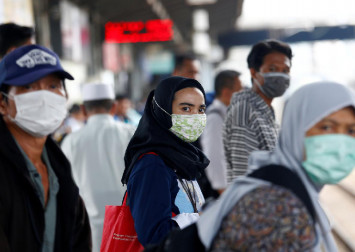 As a member of the tenants alliance protesting the demolition plan, Parat was especially annoyed that the epidemic had disrupted the alliance’s activities. While more than 500 tenants had joined the cause, their activism now largely occurred in isolation behind the closed doors of individual apartment units.

“We never hold meetings anymore,” the 73-year-old told The Jakarta Post on Wednesday.

The tenants of the Tanah Abang rusun in Central Jakarta had a similar experience.

The women of the apartment complex usually gathered in the complex’s yard for their thrice weekly aerobics sessions, but the fun workouts ran into a jam three weeks ago.

“We also had to tell the women to maintain safe distance from each other when hanging up their laundry together [in the yard],” said Sumarno, the chairman of the Tanah Abang Apartment Tenants Association (PPRS).

The Indonesian capital city, which is home to at least 10 million people, recorded 2,474 confirmed cases of Covid-19 and 242 deaths, according to the official government tally on Wednesday. 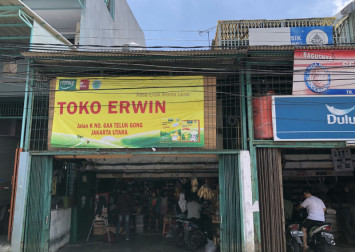 As the epicentre of the Indonesian outbreak, these figures represent nearly half of the national tally of 5,136 confirmed cases and 469 deaths.

The data does not indicate the actual spread of the disease, particularly as to whether it has reached densely populated residential high-rises like the rusun in Klender or Tanah Abang.

Experts have warned, however, that people in densely populated communities and settlements are at higher risk of contracting SARS-CoV-2 – the virus that causes the disease – primarily due to the tightly packed living quarters and shared public amenities that are common features of such areas.

Clara Siagian, a doctoral student at Australian National University’s (ANU) Crawford School of Public Policy, said that communal facilities meant that poor families living in the vertical buildings of low-cost apartment complexes were as vulnerable to contracting the disease as poor families that lived in kampungs.

“Many low-cost apartments have shared facilities like elevators, canteens and multipurpose rooms, which increase the vulnerability to [viral transmission] within the [community],” she told the Post.

Apartment management have reportedly stepped up efforts to contain the spread of Covid-19. 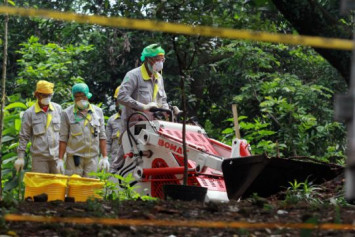 The Jakarta Housing and Settlements Agency’s Meli Budiastuti, who heads the management unit of the Jati Rawasari and KS Tubun rusunawa (low-cost rental apartments) in Central Jakarta, said that the rusunawa management had issued a circular to all tenants detailing the measures it had adopted to prevent the spread of the disease.

“Especially with regard to the use of elevators, [floor] stickers have been installed as a means to keep people at a safe distance from each other,” she said in the circular, a copy of which the Post recently obtained. “The management [disinfects] the shared facilities of the rusunawa and the [exterior] of the apartment units every weekend.”

Ajra, who heads the Jakarta housing agency’s management unit for the Jatinegara Kaum and Pulo Jahe rusunawa in East Jakarta, said he had taken a similar approach.

“Some residents even take part in the [disinfection], because they realised that the epidemic was a danger to [them],” he said.

But the outbreak is affecting public housing tenants in more than one way: It has also negatively affected the already straitened finances of poor families struggling to make ends meet.

According to data from the Jakarta housing agency, approximately 65,000 people representing 18,041 households live in rusunawa that are under city management.

Around 83 percent of these tenants earn monthly incomes of less than Rp 4 million (S$360), while their monthly rent costs anywhere from Rp 100,000 to Rp 1.5 million. 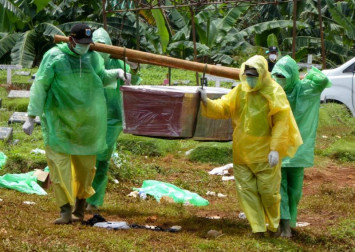 Clara, who is writing her doctoral thesis on evictees living in low-cost rental apartments in Jakarta, said that the outbreak had exacerbated these tenants’ inability to pay rent.

In some cases, failing to pay rent on time could lead to a cut in water services in a city already lacking clean water supplies and distribution, she said. This meant that the problem became one of personal hygiene, the basic preventive measure against the virus.

Clara suggested that the Jakarta administration could impose a moratorium on rent payments or subsidise electricity bills for low-income households, in addition to providing social assistance.

“It is unfair to put the entire burden on the [Jakarta] building management. The city administration and the central government should ensure that the livelihoods of these people are secure. [Rusunawa] residents already have a sense of how large the Covid-19 crisis is, but few options are available to them to protect themselves,” she stressed.

Ledy Natalia, who heads the housing agency’s regulation and community participation department, said that the city was currently discussing options to waive rent payments for the duration of the epidemic.