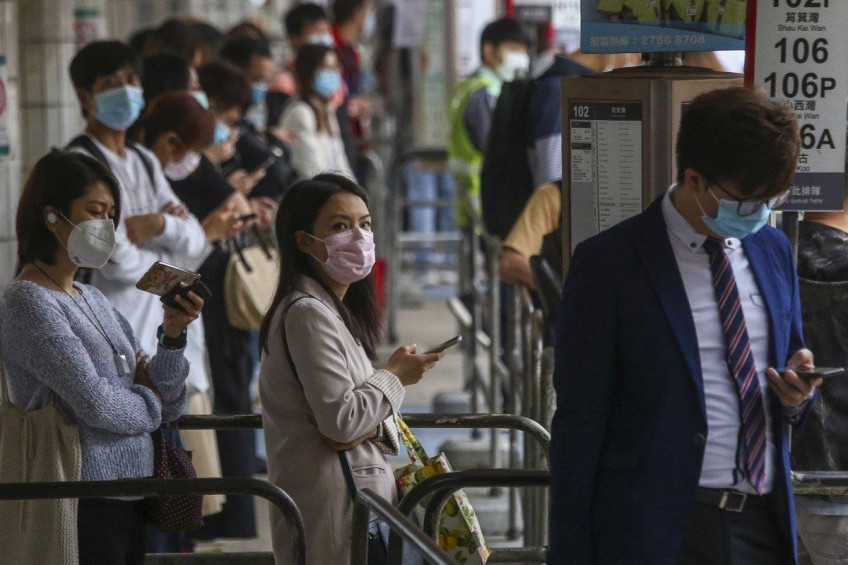 Mask wearers dominate Hong Kong’s streets but some sections of society are seen as less scrupulous in guarding against the spread of the coronavirus.
South China Morning Post

Hongkongers fleeing the deepening coronavirus crisis abroad have fuelled a surge in domestic cases, as well as increasing resentment towards city expats accused of complacency during the health crisis.

As recently as two weeks ago and with Covid-19 sweeping across Europe, the city seemed to be turning the tide against its deadly advance.

But the jump in Hong Kong cases in part from international arrivals has exposed a blame culture in a city shaken by a predicted onslaught of new infections.

A father of two, who gave his name as WO, said his 18-year-old son had been invited to a "quarantine party" in Hong Kong for when he returned to the city this week from Canada, while other gatherings continued to be organised despite official pleas to practise social distancing.

Alarmed by the cavalier attitude to the pandemic among his friends in Hong Kong's expatriate community, WO said: "We're still seeing people socialising, and with young adults or university students they have more time. They are still hanging out, there are still parties going on.

"Just because your home is very spacious, it does not mean you can invite your friends to gather there."

In the past week, there has been an influx of people returning to Hong Kong from overseas before the March 19 deadline, from when all international arrivals to the city are subjected to self-quarantine for 14 days.

Most of the new cases over the last two weeks have links to overseas travel, prompting the government to close Hong Kong's borders to all non-residents starting on Tuesday at midnight.

The spike has taken the total number of cases in Hong Kong to more than 380, with four fatalities. Seventeen of those cases are linked to Lan Kwai Fong, the nightlife district popular with expats and tourists.

A mother of two, who identified herself as JC, said she returned from India on March 15 and was self-quarantining with her family at home in Pok Fu Lam "to play it safe".

The Hong Kong resident, who has lived in the city for 13 years, said her 10-year-old son had been invited to a sleepover by a classmate who returned from Australia on March 14, and whose family were not self-isolating.

"I found it so scary. Sleepovers are the last thing you should be doing," said the 41-year-old.

Other mothers who spoke to the Post said they had pulled their children out of activities such as sailing camps fearing they would be attended by those who should be quarantining themselves.

It is part of the growing anger in the city over the way people are responding to the crisis. Some of the ire is targeted at expats, widely perceived - rightly or wrongly - as more reluctant to engage in social distancing or put on masks.

District councillor Paul Zimmerman said as the number of imported cases grew so too had the levels of unhappiness within the wider community against those seen as not acting responsibly.

He described seeing a group of mask-free young men on Tuesday afternoon in sandwich store Pret a Manger in Sheung Wan.

"I did a double take … They were looking at me like I was weird for wearing a mask," he said.

"I think what has happened in the last week … is that locals are no longer tolerant of this. It is annoying them. And I think rightly so."

However, Zimmerman said foreigners who had been in Hong Kong for a long time realised the wearing of masks was a matter of solidarity.

Another source of tension in the city is the flouting of quarantine orders.

Since February, three people arriving in Hong Kong from mainland China have been prosecuted for breaking the orders. Another five arriving from overseas also face prosecution.

In Facebook groups, people have been venting over quarantine violations, with some posts attracting hundreds of comments.

In one post, a person said they had reported someone wearing a quarantine bracelet for walking around their neighbourhood. Another commented: "Thank you for doing that".

A local restaurant Hemingway's, in Discovery Bay, blamed the behaviour of new arrivals from overseas on their decision to temporarily close.

"We cannot trust those who have been ordered to do a simple 14 days mandatory quarantine for the safety of everyone. This is the reason we are closing," the bar said in a Facebook post.

Another resident told the Post they had seen an uptick in the number of day trippers to the island of Cheung Chau, many reportedly not wearing masks.

WO said there was a cultural gulf in the approach to the crisis.

"A lot of these working class local people, who are really trying to protect their elderly at home and the kids and when they go on the streets and they see a lot of the expatriate community not wearing a mask, you get this conflict, which is unfortunate," he said.

Within the expat community, social distancing is widely debated. On social media, people returning from home are being urged to stay home for 14 days even if they arrived before the home quarantine orders came into force on March 19.

In a Facebook post attracting more than 150 comments, one person told returnees to think of others: "Please do not take away all we have worked for over the last two months … It's now your turn to be community minded. Stay home."

Speaking to the Post at a Kennedy Town restaurant, which was nearly full, a man who gave his name as Neegle said he thought the expat community was being unfairly targeted.

"People in the expat community here in Kennedy Town are coming out specifically because they know this is hard on small businesses," he said. "Everyone still has bills to pay so we come out and support each other.

"It's human nature. People will need to gather, they are going insane, and if you close down all bars and restaurants people will go to private homes, house parties.

"That's much harder to regulate because if you have still people gathering at business, the businesses will do everything they can to keep services sanitary and clean."

Others, however, pointed out that not everyone going to bars was an expat, and there were others from the local community also ignoring social distancing measures. If not managed properly, there are fears the blame culture could spark accusations of racism within Hong Kong.

Zimmerman though said he believed the unhappiness with those expats that did not wear masks, which was being seen as racist, was a simplification of the issue.

"Maybe some people express themselves in racial tones but I think it is a temporary issue, and I'm not sure that it's a dramatic increase in racial attitudes," he said.